​The Historic Silver Key
​
In December 2016, East Looe Town Trust were delighted with the surprise gift of a historic silver key that is now displayed in the Old Guildhall Museum. The key is beautifully inscribed,

'Presented by the Corporation of East Looe to J.R. Bishop, During whose Mayoralty the Town Hall was erected, as a mark of their esteem. September 1878'.

The key is a link with the time when East and West Looe were separate towns, and Cllr J.R Bishop had been Mayor of East Looe. When in 1878 the new (and present) Guildhall was opened, Mr Bishop purchased the old Guildhall (now the museum) and turned it into a reading room for the towns people. He also paid for the three largest stained glasses in the new Guildhall, depicting the East Looe crest, a portrait of Otto Bodrugan, Lord of the manor of Pendrim in the 13th Century and an Image of the George of Looe, a Looe boat that supposedly sailed against the Spanish Armada.

The key was presented to the museum by Anthony Peter, who was on holiday in Looe and called in to the Museum to tell the story of the key. He explained that James Bishop had given the key to his Great Grandfather, Major Reginald Arthur Peter, who was his business partner in Bishop & Peter.  Major Peter lived at Klymiarven House and was Chairman of East Looe Town Trust between 1906 and 1915. He also commanded No. 2 Company (Looe), 1st Cornwall Volunteer Artillery.

The key had been handed down through the Peter family, but now Anthony Peter wanted it to return to Looe.

The key was received by the Chairman of ELTT at the time, John Warne CB, overlooked by the portrait of Maj. RA Peter that hangs in the council chamber.
​
John Warne said, "I was delighted to accept the key, and thank Mr. Peter for his generous gift. The key had been a valued family heirloom, and will now be seen by many. It is a reminder of the time when Looe was at the peak of its economic prosperity, and celebrating the construction of a landmark civic building". 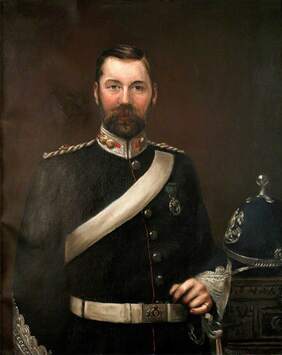