The centrepiece of the museum is the original raised magistrates bench, complete with the Royal Coat of Arms dating back to 1705, on the upper floor. It was here that a court was held every third Monday of the month.

Queen Elizabeth I issued a Charter in October 1588 to give the people of East Looe power to own land and charge rents, to own a Magistrate’s Court, to have a common seal, and to make bye-laws.  In 1685 this charter was replaced by one granted by Charles II.
​
Rulings included:
Any person being elected to the office of Mayor, and refusing to act, to be fined 40/- and imprisoned until the money is paid to the Mayor.
Aliens unloading or loading cargoes on the quays shall pay a toll of 4 pence a ton.
Every street and channel to be cleaned by tenants, owners and occupiers of houses, upon pain of 2s for every default.
An inhabitant taking into his house any person, without the Mayor’s consent will be fined £5
In 1606 two men were chosen to search every alehouse on the Sabbath days for people not attending church – they could be imprisoned and the landlord had to pay 12 pence to the Poorman’s box for every offence.
In 1700 the Mayor and his constable had to visit all the public houses on a Saturday night.
Anybody who keeps ‘tipling’ or unlawful games in his house, or plays at unlawful games, or uses tipling during prayer time, shall be imprisoned during the Mayor’s pleasure.
It is constituted that there shall be certain persons nominated to impound pigs and hogs that do go about the town.

17th Century offences included:
1664 The Mayor and Burgesses are presented for not repairing the Chapel and quays, not providing a minister for the Chapel and not providing a ducking stool.
1671 Peter Hosken and Philip Spriggs fined for letting their children break the Chapel windows.
1672 Several people find for ‘feeding hoggs at their dores’
1673 Margaret Dymond fined 10 shillings for keeping her shop open on Christmas Day. Rhichard Scadgel for abusing the Jury and calling them a company of bottle heads!
1677 Two people who refused to pay ‘Duty to his Majesty’s Account’ had goods seized; 44 hats, 1 feather bolster and 2 feather pillows.
1697 Margery Ball was presented to the court for keeping a strange child which is thought to be chargeable to the town.

The Coat of Arms
Sitting over the bench this is dated 1705 and has the initials AR for Queen Anne, however the initials GR have been added later in 1790 when the number 90 was looped into the 1705 date. GR being George III.  The latin phrases are ‘Dieu et mon droit’ meaning ‘God and my right’, and is the motto of the monarchy, having been adopted by Henry V in the 15th Century, and also ‘Honi soit qui mal y pense’ means ‘Shame on he who thinks evil of it’, and goes back to King Edward III, when Norman French was a common language in the UK.
​
The phrase is the motto of the Order of the Garter, set up by the King as a revival of the Knights of the Round Table, and legend goes that it originates from a chivalrous act at a ball. King Edward was dancing with Joan of Kent, his cousin and daughter-in-law, when her garter slipped down her leg to her ankles, causing other guests to snigger. To spare her blushes, Edward apparently placed the garter around his own leg saying ‘Honi soit qui mal y pense.’ 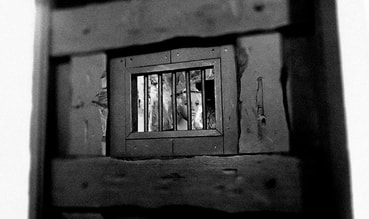 People arrested in the town would be put in one of the two cells on the ground floor of the Guildhall to await their trail.  If found guilty of a serious crime, they would be 'sent down' to the cells again before being taken to Bodmin and the County Court, and then maybe thrown into Bodmin Jail.

We have now opened up one of the cells and you can be 'locked up' to get an idea of what conditions would of been like for the criminals of Looe!
G-C78L7P0LL7