The impact of World War 2 on Looe was not as devastating as that on near neighbour Plymouth, which felt the full force of Hitler’s blitz, largely because of its naval base.
People would gather on the Wooldown, East Looe, to watch the horrifying bombing of Plymouth, twenty miles away.
Sailors from Plymouth, helping with rescue work after the raids, were sent to Looe for rest and were taken in by local families. These sailors often worked for 24 to 36 hours without sleep.  They arrived worn out and would sleep anywhere they could.  It was not unusual, for example, to find three or four men on the dining room floor of a household, completely exhausted.
​
Activity
Using the view below to help you, draw and colour/paint the scene faced by the people watching the bombing of Plymouth from the Wooldown.  Think about how you would show the sky lighting up with the explosions and how the view of the landscape would be affected. 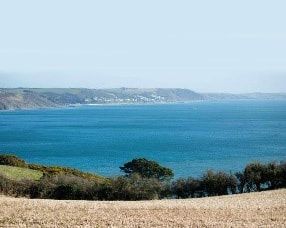