As you imagine a fishing harbour and port such as Looe has seen many a boat moored up alongside the quay.
The museum is lucky to have models of several from across the years, plus photographs and information on many others.
Here is just a small selection of what we have

The George
The George, along with a couple of other ships, is believed to have sailed from Looe in 1588 to defeat the Spanish Armada as it sailed up the Channel.  The model took around 2000 hours to complete. The stained glass window is in the council chamber of the 'new' Guildhall.

The Our Daddy
​Possibly the best known Looe Lugger style fishing boat, she was built just above the bridge in 1921 for the Pengelly family who already owned the 'Our Girls' and the 'Our Boys'. Originally skippered by AJ Pengelly, his son Terry took over in later years and she eventually spent over 60 years fishing from the port.  She then left Looe but returned in the 1990s as a charter boat taking visitors on trips as far as the Isles of Scilly. In 2014 she left again and is presently to be found in Dartmouth, Devon. We have a model of her, alongside others, in the museum and many photographs. 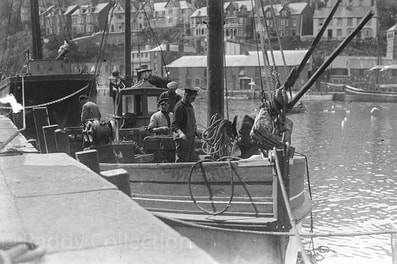 ​The Marguerite
​
A Boulogne fishing boat that ran onto the rocks of Talland Bay in March 1922. The crew were rescued by the Looe lifeboat, the 'Ryder' and we have plenty of information about the Looe lifeboats in the museum. The boiler of the 'Marguerite' can still be seen at low tide at Talland.
Learn about the Rope & Sail Makers of Looe HERE
G-C78L7P0LL7